This blog can be considered as a follow-up blog (but not necessarily) of a series of blogs on digital identity.

In this blog, we will explore why Blockchain is an important tool to build proper SSI system. Even though it is not necessary for SSI, its need becomes more and more evident when we think deep. The approach we will take to understand that need, is as follows:

The motivation for this blog I got from one of my talks I’ve given recently on Digital Identity where I was asked this question and I felt that my answer did not do justice to the audience because of the time crunch. So I would like to thank them for asking this question.

Vishwas, a frequent traveller of XYZ Airline company requests a flight ticket from Chennai to Patna. Once, the ticket is issued, he goes to the airport to presents his ticket (with other credentials like a passport or voter id etc.) to the security personal - David, at the security check. David verifies the ticket manually and let him enter into the boarding area. Vishwas then presents his ticket to Priya - the flight attendant, who scans the barcode to verify the ticket and let him board the flight.

The first thing to notice in this case study is, this system follows Issuance-Verification paradigm. Meaning, the use case essentially has three actors; an issuer (the airline company) who issues a ticket (can also be called credential), a holder or subject (the passenger) who requests the credential and holds it and a verifier (the security personal or the flight attendant) who verifies the credential. Take a look at the figure below.

Also, note that the verification system (security for example) does not belong to the same system where the credential was issued. For example, the security personnel does not belong to any airline company but belong on third party org, say government. Because of that, the problem is, either the verifier needs issuers to be online at the time of verification or the verifier has to verify the credential manually as there is no other option left for him.

For sake of understanding we have two different kinds of verifier in this particular use case:

For flight attendant, this problem is not there since she belongs to the same system and she can verify the credential digitally, i.e. using bar code in this case. But for third-party verifier, it is a very important problem which may lead to a major security breach. I am sure you might have noticed how security personal verifies your boarding pass at the security check, he just takes a look on that and let you enter the boarding area.

We all know how digital signature works.

Take a look at the fig below:

But then the obvious question is:

How does Bob gets Alice’s public key?

Alice MUST not send her public key along with the same request otherwise the one (hacker) who is listening to the channel can replace his public key and signature which Bob will be able to verify. Which means there has to be a separate channel/medium to communicate the public key.

The simplest possible way to solve this problem is, having a common database which both of these parties have access to. All these actors (issuer and verifier) will pre-publish their public key, A_pk, B_pk on this common database and whenever a verifier need, he can simply refer to this common DB to fetch the public key. There is no problem in making this database publicly available since public keys are meant to be shared and known to everyone.

But then the next obvious question is:

Who owns this database? and what is the guarantee that the public key stored in the DB is not been tampered?

Now before we go any further let’s stop here to think for a moment. If your business does not have a problem in trusting this centralised third party who owns the database, then you do not need any other solution. This solution is sufficient enough for your business. However, I will still leave you with one question;

How would you ensure the liveliness of this database? This database server is going to get flooded now.

It looks like we circled back to the part of our problem statement. I understand this question does not make sense especially when we work with cloud service providers such as AWS, Azure etc. which promises decent uptime and better scalability options and when we think of just one use case from which requests are coming. But the verification requests can come from several different verifier systems and the load expected to grow exponentially. Think of, Public Key Infrastructure (PKI) based Addhar system, where a user can use his Addhar card in several different systems to avail different services, like tickets, e-bill, insurance etc. And all of these services has to make verification requests to the issuance system.

Now instead of a centralised database, if we use Blockchain which can act as a global repository for public key identifiers (also called Decentralised Public Key Infrastructure (DPKI)) to verify the issuer, it can solve both our problems:

Now, we can see our final model look something like this: 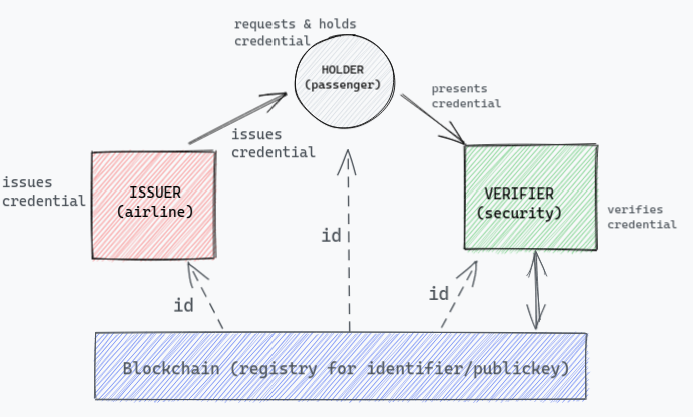 I would like to conclude by saying, that blockchain not just plays an important role in shaping the future of digital identity and will eventually become a major tool to implement SSI ecosystem but also it reopened the discussion of identity again, giving people the hope to implement better identity layer which was missing on the internet.