In this blog, our purpose is to take an in-depth look at how biometrics works. There are multiple types of Biometrics like Facial characteristics, Fingerprints, Iris pattern etc. and they are fairly complex to understand. So we will just focus on Fingerprints, to make biometric identification process simple and easy to understand. We will start with the definition of Biometric and its types. Then will talk about how fingerprint works, where we will talk about different stages of fingerprint verification process. In the final stage of the verification process, which is Matching we will only talk about Minutaie based matching using BOZORTH3 algorithm.

Finally, we will conclude the discussion with how we can make use to this technology in our day to day life to identify ourself to any service provider without the need of username and password.

Biometrics are biological instruments that can help to identify individuals. It is defined as, the automated methods of identifying or authenticating the identity of a living person based upon one or more intrinsic physical or behavioural traits. The term biometrics is derived from the Greek words bio (life) and metrics (to measure). The major use of Biometric is for identification and access control. It is also used to identify an individual in groups that are under surveillance.

There are different forms of biometric technology. Some of them are the following.

Researchers claim the shape of an ear, the way someone sits and walks, unique body odours, the veins in one’s hands, and even facial contortions are other unique identifiers. In this blog, we will only focus on Fingerprint.

Human fingertips are fully formed at about seven months of fetus development and ridge configurations which form distinctive patterns. The good thing about these patterns is when fully developed, they do not change throughout the life of an individual. Print of these patterns is known as fingerprints.

A bit of history here:

How does fingerprint works?

In general there are two stages: enrollment and verification and/or identification. The enrollment phase creates an association between the user and the user’s biometric characteristics. In this phase, the user’s biometric is captures using fingerprint scanner in the form of an image. The capture device returns an image, usually with 256 grey-levels, which consists of dark (ridges) and bright (valleys) lines. Then certain unique and identifying features extracted from a user’s fingerprint are stored at the biometric database. Verification involves validating if a claimed user is the actual user. Identification is matching an unknown user from a list of potential candidates

There are two key challenges to address here:

The most widespread fingerprint matching approach relies on the uniqueness of a fingerprint’s prominent singular points known as minutiae. These minutiae are represented either by bifurcation or termination of ridges - look at red dots in the figure below.

Basic fingerprint image consists of ridges, valleys, cores, deltas, pores etc as shown in Fig. The ridge endings and ridge bifurication’s are used for comparing two fingerprints with each other, denoted minutiae based matching.

These are vairous stages of fingerprint verification process like shown in the figure below and can be broadly categoriese into the following:

The first stage consists of fingerprint sensing which has been historically carried out by spreading the finger with ink and pressing it against a paper card and then scanned, resulting in a digital representation. This process is known as off-line acquisition and is still used in law enforcement applications. Currently, it is possible to acquire fingerprint images by pressing the finger against the flat surface of an electronic fingerprint sensor. This process is known as online acquisition.

Acquired image may contain noise that is removed in pre-processing stage and minutiae are extracted from pre-processed image.

Minutiae extraction of the fingerprint is performed by using the algorithm developed by NIST. 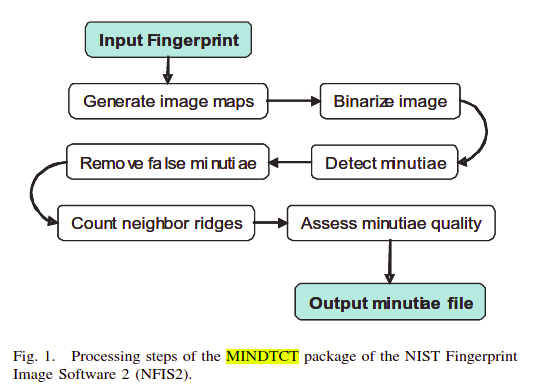 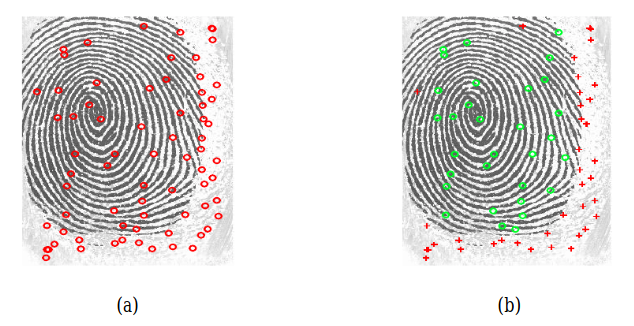 Fingerprint matching is a difficult approach due to quality variations of the fingerprint from the same user in time. These variations are due to changing skin conditions, noise, errors caused during extraction.

Types of matching are:

Some of the fingerprint matching techniques are:

We will only talk about Minutiae-based matching since this the one very popular.

Minutiae-based matching performed using BOZORTH3 algorithm. This algorithm generates a score based on pairing minutiae of the fingerprints. BOZORTH3 is an algorithm and utility that matches two minutiae patterns with each other and produces a match score. 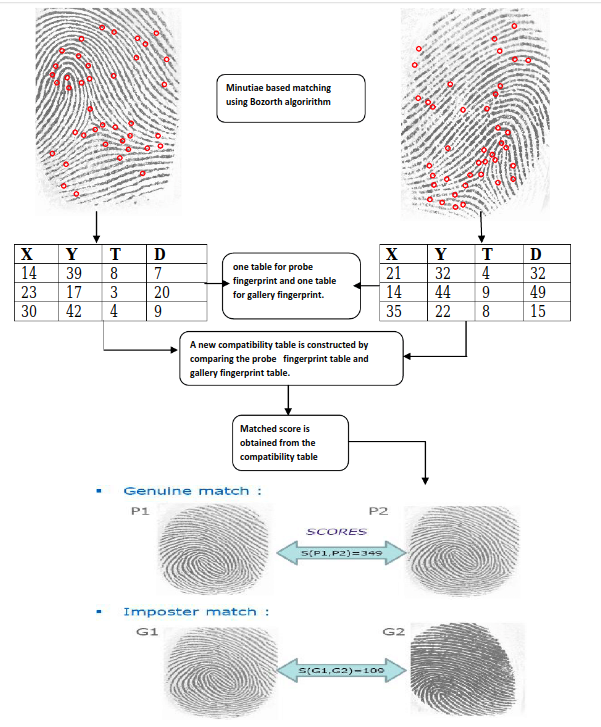 The use of authentication builds a sense of trust for the end users, prevents access to a the network or service to intruders (i.e., external attack), and is necessary for holding a person accountable, in case the threats were a result of her actions (i.e., internal attack). Authentication along with the CIA Triad (confidentiality, integrity and availability) is one of the most important aspects of any cyber-physical system.

In this case, Biometrics seems to be a better option to proof user’s identity since it talks about Something the user is!